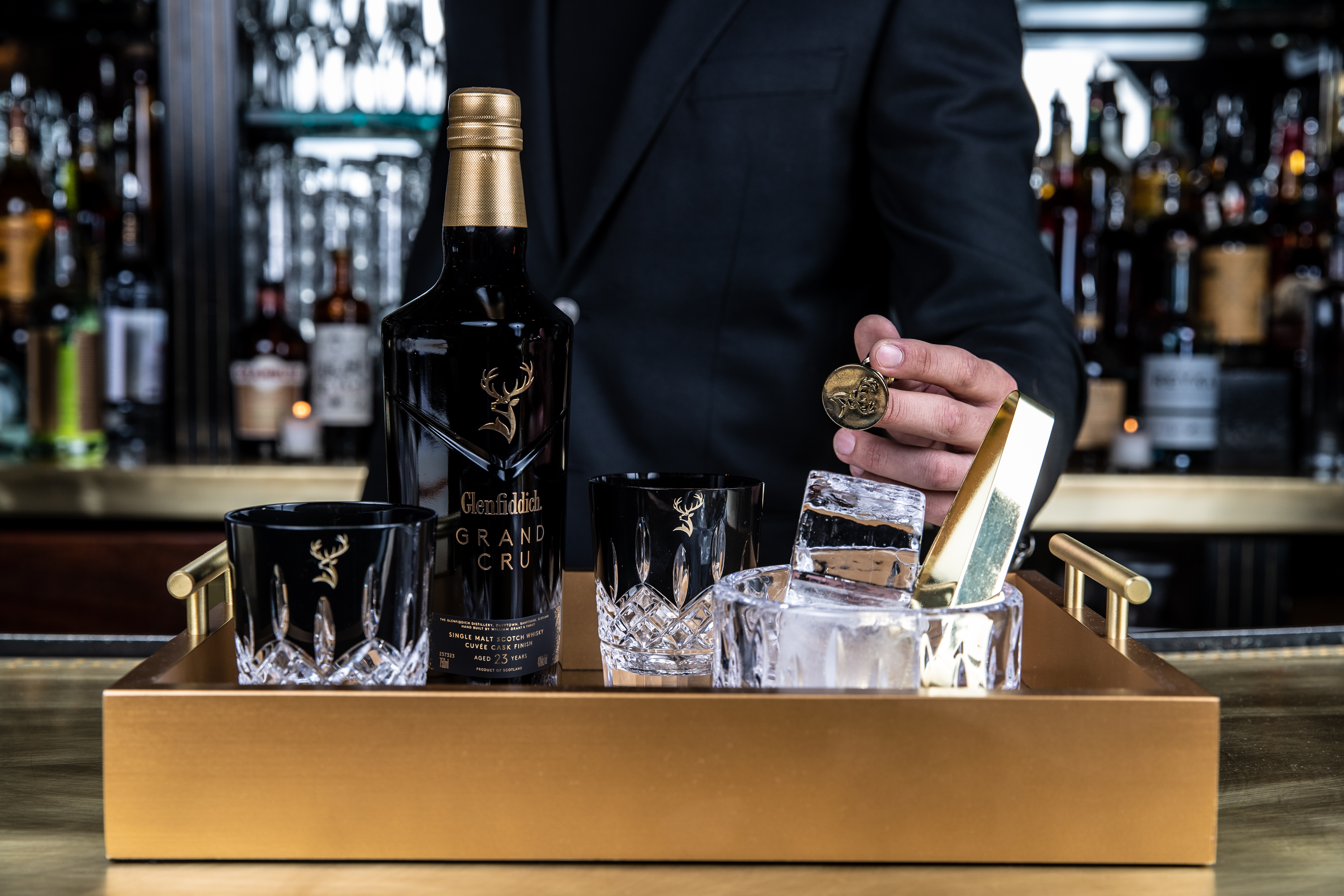 Although the ‘Auld Alliance’ between Scotland and France may have seen its origins in historical posturing against the English Crown, it was arguably cemented by the Scots’ insatiable love for their ally’s exceptional wines – which were imported for centuries in eye-watering volumes through the east-coast Port of Leith. Back in the 18th century, while whisky was very much the drink of the common people, it was French wine that was seen as the true gold standard of indulgence and celebration for the merchant and aristocratic classes.

However, as the years rolled on, this exchange ended up going both ways and France is today counted as one of the most important markets in the world for Scotch whisky, which, no longer the stuff of crofters, is widely accepted as the world’s preeminent luxury spirit. Recently, the legacy of this international partnership has been honoured by the release of Grand Cru, a new expression from Glenfiddich.

Named for the influence imparted by partial maturation in ‘French cuvée casks’, Glenfiddich Grand Cru was unveiled at a dazzling event in Singapore that was attended by a hand-picked roster of international influencers and journalists. Eschewing the traditional stereotypes of whisky as a drink to be sipped after dinner, ideally be a roaring fire in one’s very own Scottish castle, the light and fresh flavour profile of Grand Cru has been crafted specifically to make it perfect for moments of celebration – occasions when one might traditionally reach for a glass of bubbly.

Decked out in opulent black and gold packaging, it certainly looks the part on the shelf next to bottles of Veuve Clicquot, Bollinger, and Dom Perignon, but the similarities are more than skin deep. In fact, Glenfiddich’s malt master, Brian Kinsman, was inspired by the bright, fruity and effervescent character of sparkling wine when creating the flavour profile of this new whisky, which has been carefully crafted as a nod to a particular member of drinks Royalty from across the water in Northeastern France.

Global Glenfiddich brand ambassador, Struan Grant Ralph, explains, “Fine sparkling wines are long established as the drink to celebrate with. However, we wanted to challenge that convention and we did so by crafting an expression that plays on this celebratory liquid, but that brings the substance and smoothness of single malt.”

But what exactly is in the bottle? Well, being a single malt Scotch whisky, 100 per cent of the spirit was distilled from malted barley at the Glenfiddich Distillery in Dufftown, Speyside, Scotland. This spirit was then filled into casks and matured for an impressive 23 years. The ageing predominantly took place in American oak casks, which tend to impart flavours such as vanilla and coconut; though some of the spirit was also matured in European oak sherry seasoned casks, which tend to deliver more robust flavours including dark chocolate, cinnamon and clove. Importantly, the spirit chosen was still remarkably bright and fresh, exhibiting plenty of the distillery’s characteristic style – despite spending so much time in wood. So far, though, it’s been business as usual as far as whisky maturation is concerned.

What makes Glenfiddich Grand Cru special is the fact that the spirit has undergone a secondary maturation, referred to in the trade as ‘finishing’, of up to six months in a combination of first fill and refill French oak casks that were previously used to ferment wines – in particular, those from Northeastern France that eventually become ‘some of the world’s most extraordinary sparkling wines’. This somewhat convoluted description may raise an eyebrow or two, as the glitzy gold packaging, references to ‘celebration’, and the coupe glasses used in this whisky’s marketing none-too-subtly suggest to us that this spirit has a link to one effervescent wine in particular; a sparkling wine that is the undisputed symbol of status, luxury and festivity the world over.

However, on the bottle we are told only that this whisky has been matured in ‘French cuvée casks’ – why are we dancing around the C-word? It’s for good reason. This description is important because, when it comes to a product that combines the heritage of two of the world’s most famous alcoholic beverages, both of which are protected by strict definitions and laws of Geographical Indication, one does indeed have to choose their words carefully. What’s more, this famous French sparkling wine that we all know and love may not be called by its name, Champagne, until it has jumped through a number of hoops.

As with still wine, the grapes (Champagne producers favour Pinot Noir, Chardonnay and Pinot Meunier) are pressed and the juice fermented. For practical purposes, this vinification usually takes place in large tanks. However, in the case of some of the most famous Champagne houses, such as Krug and Bollinger, oak casks are used instead. Then comes blending to produce a consistent product, which usually involves the mixing of different vintages (years), crus (literally ‘growths’, but refers to the growing location) and grape varieties. In exceptional years, producers may choose to only use wines from one year to create a vintage-dated product. In the wine world, a blend is known as a ‘cuvée’, but in Champagne it also refers to the precious first portion of juice from the first pressing.

At this point, the wine is still just that – wine. Next comes the second fermentation, in bottle, which creates the bubbles for which the drink is famous. After that, the now-sparkling wine must be left to ‘age on lees’, which means leaving the wine to age in-bottle with the ‘fine lees’ (dead yeast) that is left over from the second fermentation. This must take place for a minimum of 12 months for non-vintage (with a total of 15 months bottle ageing) or three years for vintage Champagne. In practice, most are cellared for much longer. Finally, a series of processes called riddling, disgorgement and dosage see the lees collected in the neck of the bottle, the sediment quickly removed, and a small amount of still wine (the dosage) added to replace what is lost during disgorgement. The sugar content of the dosage wine determines the overall sweetness of the final bottled product – which may be described, from dry to sweet, as extra brut, brut, extra dry, sec, demi-dec or doux. With the cork replaced, the process is complete and this sparkling wine can now be described as Champagne.

What’s important for the purposes of understanding Glenfiddich Grand Cru is that it is the French oak casks used for the initial fermentation of wines that have been utilised for the whisky’s finishing – and a close reading of the process above shows that there’s no such thing as a ‘Champagne cask’. It is for this reason that Glenfiddich settled on the term ‘cuvée cask’, as it points us, with a knowing wink, in the right direction without falling foul of any regulated terminology. Nevertheless, that technicality doesn’t take away from what makes this wood very special indeed.

Unlike barrels that have simply been used to age wines, fermentation in cask significantly impacts the characteristics of the oak, particularly sugar levels and acidity, and therefore the types of flavours that can be imparted to whisky. The grape varieties used and both the length and number of fermentations conducted in a cask also all have an impact on the transformation of flavour compounds in the oak, which are left eagerly waiting to interact with Glenfiddich’s spirit. “Marrying the best of both worlds,” says Brian Kinsman, “the final liquid is exquisite and a special tribute to each individual cuvée cask the malts were finished in.”

Available domestically at 40% ABV, travellers visiting duty-free can pick up an exclusive version bottled at 43% ABV for RRP £220/US$300. Boasting aromas of apple blossom, freshly baked bread and candied lemon, with sweet brioche, sandalwood, pear sorbet and white grape on the palate, Glenfiddich have successfully drawn inspiration from the rich heritage of two worlds to create a new gold standard that’s worthy of celebration.

0 comments on “The gold standard”