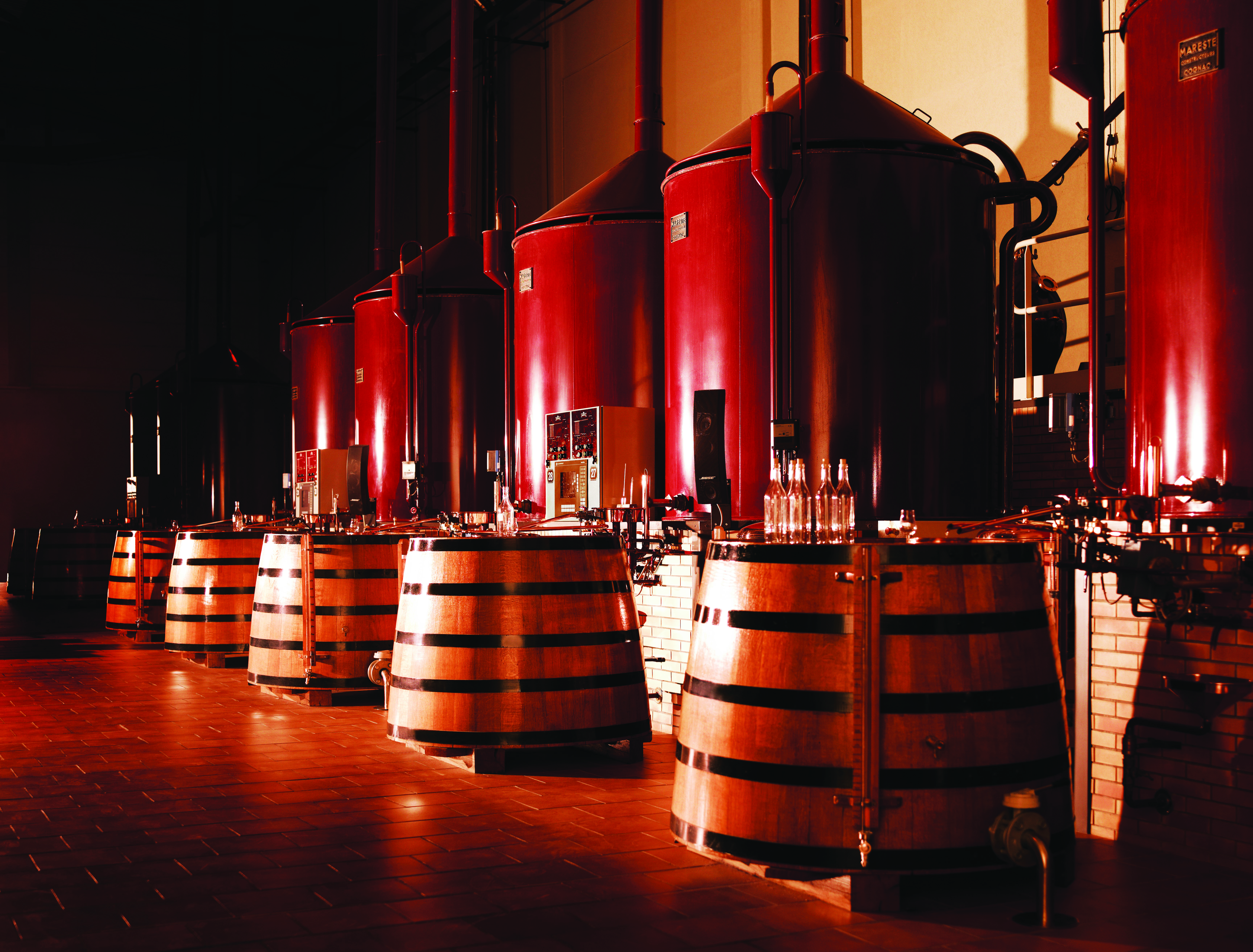 France isn’t short of options when it comes to iconic libations, but one that seems to be an ever-rising star is Cognac. Champagne still gets people excited, of course, and Armagnac has a loyal following, but Cognac seems to traverse a number of demographics and personalities and is quickly becoming the height of luxury drinking. As many of us choose to drink less often but pick spirits of greater quality, more and more we’re making that choice Cognac.

There’s plenty that links Cognac to the other premium mark in spirits – that of whisky, particularly Scotch. However, for my money, the reason both are proving to be such highly sought-after liquids is the sense of time and patience they evoke. For those of us who combine global travel with a penchant for good drinking, Cognac can prove an even deeper passion – the houses producing this fine liquid make an excellent touring option with their proximity to one another, while the history of each family and brand is more often  than not compelling.

Cognac is a commune in the Charente department of Southwestern France, situated between the towns of Angouleme and Saintes. Average temperatures are relatively modest and therefore likely to be perfect for a spot of drinks tourism. Getting to Cognac need not be too much of a chore either, but requires a little bit of selection when it comes to choosing your French airports. Naturally, the choice of many when flying into France is Paris, but from either Charles de Gaulle or Orly you’ll be faced with a near five-hour car journey or at best a three-hour train ride with a changeover. However, for Cognac lovers, Charles de Gaualle does often feature exclusive bottlings or launches that might make such a journey more palatable.

Instead, it’s perhaps easier to fly into Bordeaux–Mérignac or Limoges with a maximum two-hour journey from then on.

The Cognacs that are widely enjoyed internationally are still very much produced by a smaller number of distilleries or houses – for those travelling the region, most of them also offer visitor experiences and tours befitting such a luxury spirit.

Perhaps the first place to start is with the house at the forefront of Cognac – Hennessy. It possibly gained a wider fan base with the 2004 song by Tupac, similarly named, however the house was founded in 1765 by the Irishman Richard Hennessy, who was an officer serving in the army of Louis XV. Just 29 years later it would be making its first deliveries of Cognac to the United States, a market which already had a soft spot for the spirit.

The V.S.O.P was made in 1817, reputedly at the behest of King George IV of Great Britain, who asked the house to make a, ‘very superior old pale’ Cognac. The X.O would follow in 1870 when Maurice Hennessy launched the classification that today is one of the benchmarks of a Cognac house.

Visits are available at the distillery and opening times vary across the year. Until 10 November the distillery is open every day with tours running between 10:30am and 17:30pm. Tours range from a cocktail workshop, right up to a grape-to-glass experience that changes throughout the season. The latter is an in-depth experience that takes in tasting of eaux-de-vie through to private visits of usually closed areas of the distillery. Best part yet, the trip begins by boat as you cross the Charente River and discover the town for a unique vantage point.

From Hennessy it’s a short 10-15 minute walk across town to another of the iconic houses, Rémy Martin. The brand actually has a number of different sites, including the Historic House in the centre of Cognac and its Merpins Estate where the distillation and ageing takes place.

The house story goes that in 1724 a young winemaker named Rémy Martin began selling Cognac under his own name. Historical texts show that Martin’s Cognacs were so good that then King of France, Louis XV granted him the right to plant new vines in 1738 – not a bad result after a mere 14 years.

The first Rémy Martin Grande Champagne Cognac was then created in 1830, before Paul-Emile Rémy Martin took the house and its spirit abroad, accompanied by its now iconic centaur motif since 1870. Over 100 years later, in 1981 the Rémy Martin X.O was created under the stewardship of the renowned cellar master André Giraud.

Today, Rémy Martin offers visitors to the region 13 different experiences through the year. Guests can discover the estate by train or stopover at the historic house, learn about tasting, chocolate pairings and cocktails and taste some of the most premium Cognacs produced by the house.

Another Cognac House located in town is Martell – roughly 10 minutes’ walk from the railway station. The Martell family started producing their Cognacs in 1715, when Jean Martell left Jersey and started forging connections with winemakers in Cognac that would subsequently last generations. Martell’s widow would take over the business in 1753 and instil the philosophy, ‘I want only the best, without artifice.’

Martell first used the V.S.O.P label in 1831, with the first country to receive shipment of the expression being the United Kingdom. The spiritual home of Martell is the Château de Chanteloup, which was acquired by Théodore Martell in 1838. Martell has also been served at numerous historical moments including the coronation of King George V of England in 1911, the signing of the World War I armistice in 1918 and during the first official visit of Queen Elizabeth II to France at a reception in the Louvre. For those who prefer pop culture to history, the flagship expression Martell Cordon Bleu (first launched in 1912), was also enjoyed by Martin Sheen’s character Captain Benjamin L. Willard in the film Apocalypse Now.

For visitors, the Martell experience is a little different to the others in town. Guests get to map out their own personal journey dependent on their interests, choosing a theme: Heritage, Savoir-Faire, or Part des Anges. Once you’ve completed your journey, you can develop the knowledge further on either the Craftsmanship or Borderies experiences. At the end of either, you’ll have bottled your own Cognac or be leaving with a personalised bottle of Martell Réserve Borderies, which is surely the ultimate Cognac souvenir.

If Martell’s historical significance has left you wanting a further taste of Cognac’s place in time, Courvoisier was the brand that toasted the Grand Opening of the Eiffel Tower in 1889, with luminaries including the future King Edward VII of England, Vincent van Gogh, Henry James and Thomas Edison.

The house’s story actually starts in Paris in 1809, amongst the smouldering fires of the French Revolution. Emmanuel Courvoisier and the mayor of Bercy, Louis Gallois, opened a wine and spirit company on the outskirts of town, with easy access to the river and a thriving wine trade. Their reputation for brandy quickly grew and they were even visited by the Emperor Napoleon Bonaparte, who started to give a ration of Cognac to troops in his artillery companies. Indeed, the links between Courvoisier and Napoleon are many, including the now iconic bottle design being named after his first wife Josephine.

It was not until 1828 that the sons of Courvoisier (Felix) and Gallois (Jules) moved the distillery from Paris to the town of Jarnac, right in the heart of Cognac region, where the brand remains rooted until this day. If Hennessy and Martell have their references in rap and film, Dickens provides a literary touch point. Among the 2,160 bottles of alcohol in his collection at the time of his death, 216 were bottles of French Cognac labelled with the initials of Felix Courvoisier. He clearly had quite the taste for it!

The flagship Courvoisier range includes a V.S, V.S.O.P and X.O, alongside V.S.O.P Exclusif, Napoleon Fine Champagne and a number of vintage expressions. Visitors to Jarnac can stop by Courvoisier for either the Classic or Premium tour, or a ‘Bottle your Own’ experience, all available throughout the year.

0 comments on “For rappers and writers”